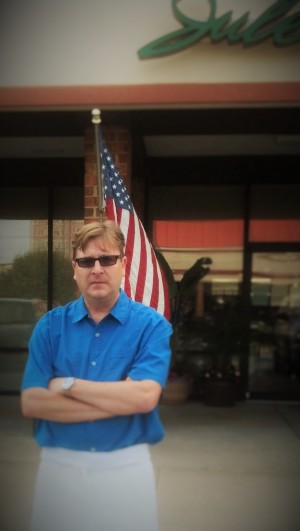 Julius Adam Sanders graduated from Sullivan University National Center for Hospitality Studies in Louisville, Kentucky with an Associates Degree in Culinary Arts. He has been the executive chef and sous chef at some of the area’s most acclaimed restaurants.

Chef Sanders has been cooking professionally since the age of 13. He has lived in Washington, D.C., Chicago, and Louisville, KY but always returned to his home in Ocean City.

Chef Sanders has continuously been the exclusive Guest Chef at the Saint Michaels (MD) Wine Festival’s Rare and Reserve Wine Tasting dinner since 2010. He has led cooking classes in his restaurant kitchens in addition to teaching classes at the Seaside Culinary School in Rehoboth Beach, DE and worked with local Culinary Arts students preparing for National Certification. He has been featured on local television and radio and in many publications including Southern Living, Maryland Life, Links & Living, the Baltimore Sun, and many others.

Chef Sanders has been the recipient of many awards and recognitions including 2016 Best Chef Eastern Shore, Metropolitan Magazine; National Chef of the Year in 2001, Hot Chefs of Delmarva (2000); Featured Chef of Delaware Today Magazine, and the winner of several medals from various culinary competitions on the east coast.

Chef Sanders now resides permanently in Ocean City, MD with his family. Jules Fine Dining Restaurant was opened in 2003 and remains his passion. Cooking is what Chef Sanders knows… and he surely knows excellence. To quote Southern Living Magazine, Jules’ Restaurant – “It’s to die for”!